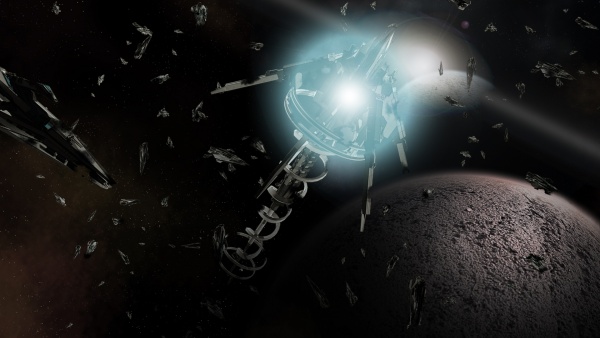 You don't want to be near when it fires...

A deadly ship that is Lost Technology, left by the ancient Ryuvians. Of incredible size, surpassing even the Legion with 4 km of length, it's current classification is that of a super-dreadnought class, the only other known ship with that same classification being the Legion. Even so, being a piece of Lost Technology, it's certainly even mightier: it's able to create a blast with a range of half a light year (with no possible protection) that is more powerful the closer you are to the source (close to the epicentre no Ryuvian Cruisers were found, and even those at a considerable distance had been damaged). It also had an enormous Ryder carrying capabilities due to it's size, with approximately the capacity of 1000 Ryders, and is likely that also had number of conventional weapons comparable to that of Ryuvian Cruisers (and likely superior). Its other peculiarity related with the intentional restrain imposed by the Ruvians is that it only has one control station; the ship an all of its functions is controlled by only one person with aide from the ship AI.

It has lain dormant for centuries in the Mnemosyne Abyss until the Sunrider and her crew visits it in search for the Talbur. Captain Shields first meets Sola here.

The Sharr'Lac was once a common ship used by the Ancient Ryuvians, but it's incredible power forced them to restrict it's use, because the case of a war were such power could be used easily carried the real danger of destroying the Universe. Because of that the Empire Dynasty built a restraint. It could only be used if the most beloved daughter of the Emperor was sacrificed. In theory only the daughter of the Emperor could access and use the control station of the ship, and to do so it had to enter the capsule contained inside the bridge. Supposedly, she would die by means of an unknown mechanism upon successfully firing the main weapon. In the battle against the Fallen, in one of the numerous Ryuvian civil wars, the father of Sola (nominal emperor but fighting against an open rebellion) used it to try to win the War, with the aproval of his daughter. This created the ship graveyard that the Sunrider's crew observed, and likely had an impact in the war (however, due to the antiquity of such war there is no more information about the war or its winner). Despite its use, however, Sola survived, though she was put in cold sleep for at least 2000 years.

The Sharr' Lac presents very strange capabilities, being one of the few ships that, despite having installed some sort of restraint in it, still retains some of the deadly and superior technology that can't be compared to anything else in the galaxy (in comparison to the Ryuvian Cruisers, that while superior to normal cruisers, has technologies that are simply slightly more advanced or refined than normal). Superdreadnought class in both its fire power and size, aside from an enormous Ryder capacity and finally controlled only through a unique control station used by one person. Not only that, while the details are unknown, it had some kind of A.I. that not only was able to detect intruders, it also had the ability to autonomously reactivate its functions (even with its pilot directly engaging the intruder in her Ryder) and take control of the remaining inactive but still combat-capable cruisers in the graveyard, successfully activating them and commanding them against the intruders despite not having any living crew remaining. It is also able to emit a voice, but that speaks in a language unknown to any current living being (even in modern Ryuvia). Sola di Ryuvia speaks with the common tongue, though it is unknown if she knows that language and simply also learnt the common tongue, or simply also doesn't understand the language. 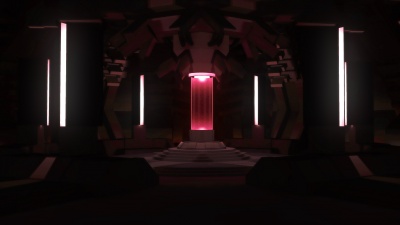 It is unknown if more of these ships survived, or if these other ones could be either sealed or simply non-functional. This in particular was completely destroyed by a core meltdown once it tried to use it's blast to destroy the Sunrider, curiously, without needing Sola on board - or perhaps possibly it's malfunction was specifically due to it trying to activate it's weapon without Sola aboard it to regulate it into it's weaponized state. The image is that of that blast, captured by the Sunrider's monitors.