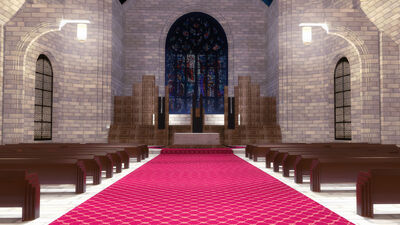 The Star Palace. Every similarity with your local church is unintentional

The planet that is the origin and namesake of the Holy Ryuvian Empire, Ryuvia Prime is an habitable planet, but years of history and exploitation (10000 at least) has lead what would be a planet full of natural resources to a shell of what it was, not unlike Ryuvia. With one moon, Ryuvia Prime is commonly referred simply as Ryuvia, now that it has become the only territory of the nation. It probably was it's original name, with Prime being added as a honorific to signify the importance of the Planet as the "First" of the nation that carried it's name. The two most important places in it are the Mount Destiny, place where in ryuvian legends God created humanity, and the Star Palace, an orbital fortress above Ryuvian surface where the ryuvian emperor had it's residence. The latter has suffered the pass of years, but it probably still has one of the greatest collections of art of the galaxy (together with the Palace itself, considered by most the most splendid of them all) and even after all the decay still houses the Emperor and it's court. It's also the place where ceremonies related to ryuvian royalty take place, such as the crowning and marriage of royals.