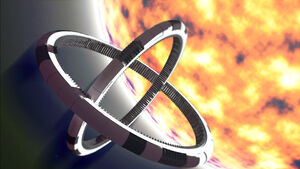 The Paradox Core in orbit around Helion

The Paradox Core, originally the "Paradox Project", was first conceived as a project created by the scientific colony on Diode as a research experiment into the possibility of space-temporal manipulation - a precursor to the supposedly-fictional science of time-travel. It was built in the Diode system due to one of the world's binary stars having collapsed into a black hole, which the scientists observed and studied as a precursor to their own project. However, the experiment went hideously wrong - later revealed to be the result of Sabotage enacted by another of Diode's brainchildren; a race of telepathically-capable genetically-engineered superhumans known as the Prototypes - and the Project created an out-of-control quantum singularity that consumed the research station and all aboard, as well as nearly half the planet of Diode itself, before collapsing. This tragedy cost the galaxy many of it's best scientific minds and, in secret, unwittingly spawned the idea for a weapon of terror the likes of which had never been seen before.

The second iteration of the Paradox Project would be the Paradox Core - a reconstruction of the original that was vastly upscaled into a doomsday weapon developed by PACT, created using the research from Diode that led to what was now remembered as the Diode Catastrophe. Whereas the original had been capable of almost destroying an entire world, the upsized Paradox Core was capable of devouring an entire star and possibly even it's surrounding system of planets, making it into a weapon of inhumane proportions.

During the Alliance-PACT war, Chigara Ashada identified the Paradox Core while the Sunrider was investigating the Helion system, defended by the Legion and a large PACT fleet. The Alliance deployed four fleets to assist the Sunrider in destroying the Legion and the Core. In the Second Battle of Helion, the Sunrider confronted Veniczar S. Arcadius and defeated his force of clones, at which point Arcadius revealed his gambit: detonating the Paradox Core to destroy the Sunrider and the Alliance fleets, and kill Chigara. However, having identified Arcadius as a Prototype, Veniczar B. Fontana turned on him, disarming the core and executing the Prototype. The PACT forces then withdrew; Fontana attempted to scuttle the Core with explosives, but was jammed by the Prototype brain waves emitting from Chigara. Nevertheless, the Alliance destroyed the Core after capturing it under orders from Admiral Harold Grey.Not before the latter ordered his soldiers to copy it's data so that the Alliance could recreate for one their own use albeit it be a smaller and less powerful one.