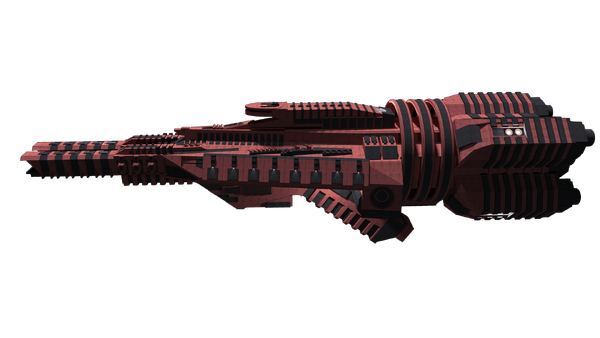 Probably the biggest mass production ship used by PACT, the carrier is an expensive and complex ship only seen in the higher scale battles. They tend to not appear on Invasion Fleets, and when they do it means that PACT considers the mission of that fleet of top priority. When they are deployed they tend to form the rearguard of their offensive counterparts, the PACT Battleships. With defences incredible high on all levels, the job of the carriers is to unload the Ryders they carry, while using their extended flak and range to provide their support fire elements with protection from lasers and missiles. Since both of them are the only widely used ways to fight an enemy at long range, this means that even a little number of Carriers can make the support fire element and the carriers themselves impervious to long range attacks. The PACT doctrine relies on this, and the Carriers launch their Ryders with the purpose of slowing and pinning the enemy. After the front line has launched the initial barrage of missiles, the Ryders attack any weak point that may surge or simply serve as cannon fodder, slowing the enemy line, and preventing them from reaching close combat with the frontal line (when the weakness of Battleships and frigates appear). Once the enemy has been weakened to non-threat level, the PACT Cruisers acting as support fire until that moment jump in and annihilate what's left of the enemy. The Carrier is then a moving fortress thought to store Ryders and anchor the rearguard (similar to what the Battleships do with missiles and vanguard). Due to this, is completely weaponless except for its flak, and is even less agile than a Battleship. The key to destroy them is then to get close surpassing their capacity to launch Ryders.

With only its flak cannons, the Carrier's directly offensive capabilities are almost nil.

The flak cannons can be used offensively against enemy targets and are particularly devastating against poorly armored enemy ryders. Its high shot count makes it a very reliable damage dealer even against highly evasive targets. Any armor though is likely to negate most damage. Being the unit with most flak of PACT, their cannons have high shot count and are particularly powerful for an assault weapon, but are still very inaccurate.

The main weapon of the Carrier are the Ryders that are stored inside itself. With an enormous size, it has the capacity to store at least 20 Ryders and launch one or two of them each turn.

This cheap and sub-par Ryder serves perfectly as cannon fodder. Not only that, when concentrated in heavy numbers (which is their usual state) their lasers can damage severely bigger ships without shields, and due to high evasion they are very annoying to deal with. The have incredibly thin armour and frame, though.

This Ryder has noticeable stronger armour than the mook, and a slightly sturdier frame. Equipped with missiles and a rocket, they are thought to provide even more fire support to the PACT fleets, and can severely damage most ships. Being bigger and slower, they are more difficult to store and launch, so the Carrier can only eject one per turn.