Operation Wedding Crash was the rescue of Asaga Oakrun from her forced marriage to Veniczar S. Arcadius in the Star Palace above Ryuvia Prime.

After the incident at the Nomodorn Corridor, Veniczar B. Cullen cornered the Sunrider with a large fleet and demanded the talbur. Regardless of whether Kayto Shields surrendered the talbur or not, however, Cullen ordered his ships to open fire the Sunrider, perhaps at the behest of Cosette Cosmos. Before the Sunrider's destruction, Asaga admitted to being the princess of Ryuvia and demanded that Cullen stop his assault. The Veniczar then took Asaga into custody and transported her to Ryuvia Prime for her wedding to Veniczar S. Arcadius. The marriage was arranged by Asaga's father King Jaylor XII, who sought to stave off destruction of Ryuvia at the hands of PACT, while Arcadius desired Ryuvia's legacy and ancient treasures.

The Sunrider depleted its stocks of repair drones to recover from Cullen's attack. Kayto confronted Asaga's friend Chigara Lynn Ashada, who confessed to knowing of Asaga's true identity. Chigara gave Kayto a recording left by Asaga, in which she pleads with Kayto not to come get her, saying that she must fulfill her duty as a princess of Ryuvia. Nevertheless, Kayto refused to let Asaga go, and directed preparations for Operation Wedding Crash. 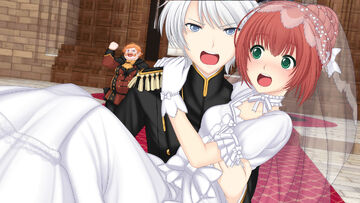 At the wedding itself, Arcadius betrayed King Jaylor, reneging on his deal to preserve Ryuvia's independence and shooting the king dead. Shortly after, the Sunrider arrived and the assault began, with Kayto leading the boarding team against Ava Crescentia's objections. Kayto grabbed Asaga and spirited her back to the ship. Sola vi Ryuvia sniped Arcadius, but he turned out to be a hologram, having never been present in person.

The Sunrider and its ryders (Black Jack included) fought their way through the PACT forces in orbit around Ryuvia Prime, and looped around one of the planet's moons to slingshot out of the system. The Legion turned out to be waiting on the other side, and nearly destroyed the Sunrider with its main gun before it could warp out. Fortunately, the Sunrider reached Alliance space safely, and moved to Far Port.

The fall of Ryuvia Prime to PACT galvanized public opinion in the Alliance, and an emergency session of the Solar Congress led to a declaration of war on PACT. 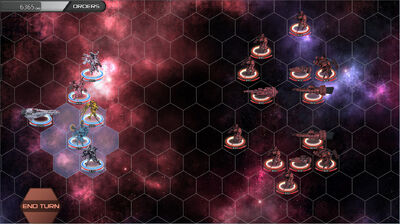 Unit placement at the start of the level

The first order of business is to take out the two PACT Battleships preventing the Sunrider's escape. Their rockets can be very dangerous; using the Liberty to disable one while closing to kinetic range is recommended. The Black Jack and Phoenix can handle the lighter units, while the Seraphim either helps pound the battleships or picks off frigates and bombers as appropriate. Make sure each unit has at least one shield covering it at all times.

Once the battleships are dealt with, move the Sunrider quickly to the right edge of the map, though not to the point of breaking shield coverage. Don't get bogged down in the trickling reinforcements; a major wave appears on turn 8, and another on turn 10. Blow the closest turn 8 reinforcements out of the way with the Vanguard Cannon if you have to. The turn 10 wave has six bombers and missile frigates; you really don't want to still be dawdling about when it arrives.