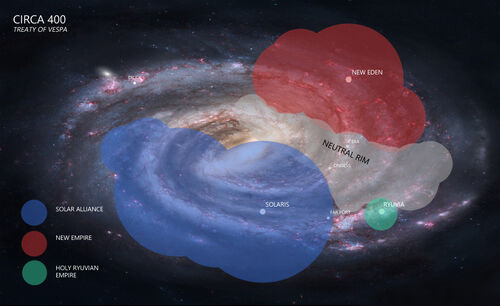 The Neutral Rim upon its formation, after the treaty of Vespa

The Neutral Rim is a region of space, situated mainly on the Eastern quadrant of the Galaxy. It's actually not a cultural, linguistic or political association, but a designation by which the rest of the Galaxy referred to the "buffer zone" between the Solar Alliance and the New Empire after the Alliance-Imperial War, a region which in theory should be independent and free from the influence of any of the two. While the distance between main spheres of influence of each power was big enough to ensure some minor planets that independence, the more attractive planets like Cera and Ongess were still toyed by the two powers. Cera, for example, was controlled by a dictatorship that was actually a puppet state of the New Empire for most of the 5th century. Ongess meanwhile was exploited without any remorse by great corporations which the Ongessite government couldn't oppose, all with the approval of the Alliance. Other planets like Tydaria meanwhile became almost private property of the companies that exploited them.

All this interference and mistrust meant that an effective sense of common nationality or culture didn't exist between the various nations of the Neutral Rim. Even when Cera managed to establish a democratic government, eliminating any trace of the dictatorship or the puppet state it represented, it adopted an isolationist policy, mistrusting both the Alliance and the independent worlds that hadn't done anything to help them, despite being the most technologically and industrially developed planet of the Neutral Rim. This effectively meant that any possibility of a joint league or a similar confederation was impossible. At most, alliances were between poor and small nations, without any kind of power even inside the Neutral Rim.

When PACT was finally formed, taking all the former New Empire's territories, the Neutral Rim was a divided mess of independent nations and puppet states, rip for the picking. Without almost any kind of important resistance PACT then proceeded to slowly conquer all the nearby systems, until it successfully encircled Cera. After a decisive victory at the Invasion of Cera, PACT rode on that momentum to finish the conquest of all the Neutral Rim planets in two months, before the end of the year 503.