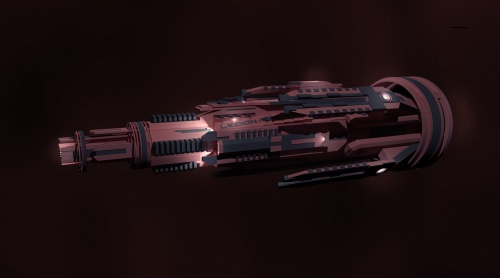 3 Km long, and with the firepower of an entire Fleet

The personal flagship of Veniczar S. Arcadius, Legion is a PACT super-dreadnought class ship, 3 km long and probably the largest ship in the galaxy that is not Lost Technology. Having a firepower matching it's size, the Legion is furthermore armed with a spinal beam cannon capable of incredible destruction (as it showed at the Invasion of Cera, when it destroyed Cera City in one hit). Since it also has a destruction power able to leave a crater of 10 km of diameter in that same surface, the cannon is considered a Weapon of Mass Destruction (though it is likely that the Alliance now and the New Empire before had weapons of similar if not superior destruction capabilities). Built without any regards to its cost and tactical flexibility, the Legion is a warship designed to act as the perfect guard and enforcer of PACT's supreme leader, and a symbol of terror and fear for its enemies. Despite it, however, don't underestimate it as only an expensive toy, since it is perfectly capable of defeating 10 Battleships alone in a combat in space, and it's main cannon is devastating enough to decide a battle if fired freely (as the Alliance fleet learned in a close call at the Battle of Far Port). It is unknown if it has Ryder capacity of any kind; it is classified only as a super-dreadnought and has not shown this capacity in any previous engagement, but it would be typical of Arcadius to reserve a hidden ace such as this, and the only other known super-dreadnought, the Sharr' Lac, had it.

The Legion has participated in four battles thus far: the Invasion of Cera, Operation Wedding Crash, the Battle of Far Port, and the Second Battle of Helion, where it may (depending on player decisions) have finally been destroyed.If the player decided to go for the Paradox core instead, the Legion pulls back alongside all other PACT units and is said to undergo changes to its armor and systems to make it almost invincible.

As seen at the Second Battle of Helion, the Legion has three weapons, not counting its Vanguard Cannon equivalent. These are similar to those of many standard PACT ships, but on a far larger scale.

The laser banks allow for accurate fire from a great distance but have the lowest damage potential of all the main weapons. Even so, on the Legion they're more powerful than most ship's kinetics. Countered by shielding.

An immensely powerful kinetic battery that is more accurate than most on PACT ships, and can be double-fired to boot. Will turn almost any ship to scrap metal in fairly short order if it connects.

A large missile volley, highly accurate and cleaves through most armor like so much paper - and the Legion has enough missiles for five salvos. Only the densest flak coverage can hope to mitigate enough of the damage to ensure the survival of the target ship.