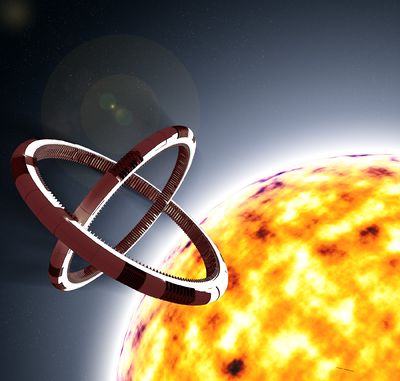 Helion was a remote star in the galaxy, far removed from most major resource centers or known points of interest until the Alliance-PACT War. The star itself seemingly lacked any planets of interest, and it's radiating bursts of energy seemed to indicate it as being a somewhat younger star.

The thing that would earn this system notoriety in the history records was when it served as the site of a secret project launched by the race of superhuman beings known as the Prototypes - then known to the galaxy as the collective face of Veniczar S. Arcadius. This project was in truth an upscaled reconstruction of the Paradox Core, a black-hole generator that the Prototypes themselves had sabotaged the original prototype of on their 'homeworld' of Diode, causing it's devastation and the death of nearly all involved.

It later would serve as the site of a decisive series of battles between the Solar Alliance and PACT, the most noteworthy ships in the fray being the PACT dreadnought and fleet flagship Legion and the defunct Cera Space Force's assault carrier Sunrider. These encounters - a scouting run turned desperate flight and the largest, most gruesome battle of the war to date - served as turning points in the war as it effectively signified the end of PACT's goal of galactic unification under their banner as Arcadius was ousted as a genetically-engineered being that was part of a collective out to dominate all of mankind, splintering the faction's once-unshakable unity as their fleets were crippled by both heavy losses and fragmented loyalties. Even greater losses followed as the Paradox Core, which had cost untold amounts of PACT's resources to build, was scuttled and destroyed by order of Admiral Harold Grey, having deemed the monstrous weapon too powerful and dangerous to let exist.

Furthermore, this star system can, depending on the choices made by Sunrider Captain Kayto Shields, become the site of two more record-worthy events - the destruction of PACT's flagship dreadnought Legion and, shortly after this, the death or capture of the galaxy-renowned and feared pirate leader Cosette Cosmos. It also serves as the site where Ryuvian Princess and de-facto Queen Asaga di Ryuvia first achieved her full "Awakening" into her generation's Sharr of Ryuvia.